A Spiritual Nexus, often just referred to as the Nexus, is a point of incredible energy, a place of untold power, equidistant from the five mystical (or wiccan) elements; earth, fire, wood, water and metal. Usually located at the center of a pentagram formed by these elements, it can be swayed either way; it could be either a force of undeniable good or a force of undeniable evil, since the symbol of the pentagram applied to both sides of good and evil. There is a Spiritual Nexus specifically located beneath the Halliwell manor, in the basement, and holds a powerful, corruptive demon whom Phoebe nicknamed the "Woogyman," prisoner. Prue and Piper discovered that the Spiritual Nexus beneath their manor was not just any Spiritual Nexus, but a Wiccan one as well, meaning that it was actually a battleground for good and evil, and that their ancestors had built the house at that particular location to reclaim the incredible power of the Nexus for good.

In the Halliwell's Book of Shadows there was a spell titled "To Banish a Suxen" placed their by the Elders a long time ago in case the Nexus ever became corrupt by evil. In the 'Triquetra' alternate future the shadow eventually escapes yet again from his prison and takes over the Nexus and the Halliwell Manor. He begins to spread evil and Prescott Street becomes the worst ghetto in all of San Franscisco. The Book of Shadows is lost, possibly destroyed, in the 'Triquetra' future but the Charmed Ones have been reconstructed. Gideon writes a new spell and gives it to Melinda, Warren, and PH-383 to go to the manor, stand over the Nexus and destroy the Nexus once and for all.

To Destroy a Nexus 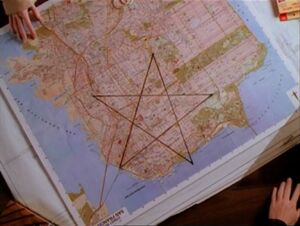 Fire, water, earth, wood and metal,
Five equal points of nature borne;
Fold the forces unto their selves
Focus their essences in this place no more.
In this hour, void its power
Destroy this center, destroy this core!

Katy Perry-Who Am I Living For? with lyrics
1099 views - 0 comments